Today was going to be the day the old fence came down and the replacement went up, but the rain had delayed it a bit. No complaints as we can use it. Maybe they can start on Wednesday or Thursday and finish before the weekend.

And they is a fence and deck outfit, I’m letting someone else do the digging.. ha, ha

Update: They, McClanahan Fencing and Decks, came out yesterday afternoon to tear down and put up posts. Tomorrow they should be out to finish things up. For now you can see the work in progress. An update will come with a few more of the finished product in a few days.

Update2: Fence is done and the feed is updated with new pics. The old fence is down, except for behind the house, that will come in time. 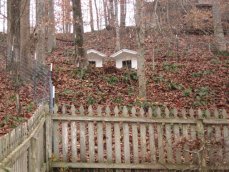 This weekends project was to move the dog houses. I finished the temporary fence last weekend, it could still use a bit of work but it should be OK for now… more on that later. So the move was up the hill in the back yard, about 50 feet from where they were. You can see from the pic on the left the angle is a little steep and their’s a flat spot fit for a pair. So after prepping a little to level where the houses would sit and getting some pavers to lift them off the ground about four inches we were ready.

A friend came by and in about 40 minutes we were done. The houses are 36 x 48 and the roofs come off. Got to say thanks to dad for that cause otherwise it would have been a three man job. Now back to “the fence should be OK for now” comment. Tonight while sitting downstairs Cooper started a barking fit I first thought was directed at the cats next door… that is common. But after a little more ruckus than normal I went up to find Cooper in and Roscoe out. So much for my good fence work !!!

It was about ten minutes to calm Cooper down and then into the truck and up the road. A quick drive around the neighborhood, as a road circles back above us to a dead end, and on the way back hear he comes jingling up behind me. One of the other neighborhood labs (lucky) was hangin around too so my guess is Roscoe found his way there and they were playing.

When we got back I put the invisible fence collars on, I took them off earlier as we went for a walk, and figured we’d be good… got it out of our system. Not ten minutes later the whole episode started again but this time he didn’t get far. Back in August I mentioned extending the fence almost all the way around the lot, good thing cause the fence caught him this time. Unbelievable !!!!. So by this time I’ve had it for the night up to the house we go with the 10ft leash wrapped to the tree and he’s staying there. I’ll work on the corner where he got out tomorrow. But in reality the wooden picket fence you see in the pic is only four feet tall, they both can jump over it if they really want to. With any luck I can make it to spring when I’ll have to put in a new fence as the existing one is close to falling down. O well what’s life without a little excitement.

Realized after getting the fence up, underground electric that is, that some of where I had laid it out was not going to work. The original thought of not making a complete box around the house was quickly thrown out the window after the 6 hours worth of laying the line, which would make me half done. So I chucked that idea and took the easy route and did not double back the same way I came. The only reason for doing that would have been a clean access out for the boys. That and an extra layer of correction zone as the double back would have extended the no enter zone farther.

It only took a week for me to realize it needed to change. After a trip to friends that just moved close a light bulb was turned on for an efficient fix. About half of our acre is wooded and I originally did not take the fence there but this put the wire very close to a narrow path the dogs use at the back of the house. When friends had their fence installed the guy that did it used staples cause they have newly planted grass. Staples now that is an idea when you have layers of dead leaves, branches and other ground cover all over the place. So this weekend I extended the fence through to the property line which now includes the wooded area.

I still need to extend one side closer to the property line but that can wait. Of course if I would have thought about this from the beginning it would not be as much work, but it’s only time right !!! Once I move the last side I can turn up the strength increasing the zone size to about 6 feet, it’s at about 2 to 3 now. With any luck that will be enough to stop any run through and keep the warning beep on the collar. I’d hate to turn off the warning and go straight to correction.

So far I’m please but also regular excercise and socialization is also going to help. At the old house the neighborhood and privacy fence did not allow for much of that.