This year’s trip was to Utah visiting Powder Mountain and Snowbasin. The week before I was able to stop in at Solitude and Alta for a few days. Weather was excellent and the snow was great. The last time I was at Powder Mountain it was 2010 and the Olympics were going on. This years trip had a interesting twist as the night before I took a puck to the foot just above the ankle. That would make things interesting.

I’d only been to Solitude and Alta once before which was more than a few years ago. I didn’t really know what to expect coming back since there hadn’t been much snow. As luck would have it snow was on the way and the first day we’d have to go up Little Cottonwood Canyon since Big Cotton Canyon was closed till 9:00am, and we didn’t want to wait. In hindsight going to Solitude was the right choice, great snow and no lift lines. I doubt we waited 30 seconds for a chair all day, Alta was a different story. At Alta the wait was a minimum of 10 minutes. Not sure if it was a Friday thing or just that more people go there. Regardless both places were excellent and the long Alta runs made up for the wait, most of the time.

The puck to the ankle would put time at Snowbasin and Powder Mountain to three days instead of the planned four. Day one at Snowbasin was excellent. The ankle held up pretty well even though the boot fitting the evening before was questionable, just strapping it tight was painful. I kept the day short and finished heading down Dan’s Run, not the best choice of runs. It hadn’t been groomed and there were a few moguls which made for more pounding on the foot than I’d like. The experience there is second to none, first class. It might be a hour outside of Salt Lake City but it’s worth the drive.

Day two at Powder Mountain was just as expected, accept for the early exit. Two years ago when we were there we skied two days and I remembered a number of runs. It was an overcast day and a little cooler, only in the 20’s but that made for good snow. With it a little colder we stopped for a break around 11:30 at the Hidden Lake Lodge. The ankle was really bothering me as continued pressure when turning was taking it’s toll. After the break I left the group and headed down to the main lodge and was going to call it quits. The “Powder Keg”, as it’s called, is small bar on the main floor and was very busy. I took a seat at the bar had a beer and hung out till about 2:00. Not sure if it was the beer, tight quarters, or feeling a little better but I headed back out for a run to see how the foot would hold up. I headed down to the Timberline lift and things felt ok. At the top of Timberline I headed over to the Sunrise tow bar and still felt decent, but knew there wouldn’t be much more. Sunrise takes you by Dr. C and Clair’s Run a couple blues that don’t get much action since you have to back track a little to get to them. I saw very few people head over there in the morning and thought if that was going to be it I’d like to see what one of them was like. Heading down Clair’s Run it didn’t take long to see fresh corduroy, that was pleasantly unexpected. Back down at the Hidden Lake Express lift I decided that was going to be it. I headed back to the main Lodge to catch up with a few others that were at the Powder Keg for a beer and a little music.

Day three would be an off day for me. It turned out to be the best weather yet, sunny and 40 and the guys reported near perfect conditions at Powder Mountain. Lucky for me weather for the next day was to be similar.

Day four weather was excellent. Back to Snowbasin for a second time the sun was shining and it was around 40 at the base. Snow held up pretty well mid mountain and above, below it got kind of mushy. The ankle held up with only one spill, not expecting the steepness on a black run … which I try to avoid in general. Finished the day with a few passes on Dan’s Run, it had been groomed this time, and a few beers with the guys at the base Lodge.

Another great trip and perfect timing for weather and snow. Hope next year is the same!

For Thanksgiving this year we headed up to Chicago to visit family. We left early Thursday morning and got into Midway around 8:30am. My sister and her husband picked us up and we headed down town to take in the sights. It was cool and overcast but there were plenty of people out for the parade on State St. 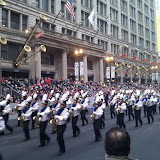 We stopped at the Magnolia Bakery to get some coffee and cookies before stepping out to watch a bit of the parade. The Magnolia Bakery is a nice little shop with tasty treats, excellent drinks, and great people. Everyone had a smile on their face or a welcoming comment.

We then walked down to the river past the Trump Tower and on to Michigan Avenue. None of the shops were open, accept Starbucks and a few others. From there we headed back to Millennium Park and walked around the Ice Rink and “the Bean”. There were a lot of families out skating, kids taking pictures at the Bean and even a few workers cleaning up leaves.

It has been years since I’ve been on Lake Shore Drive and Michigan Avenue and have never been to Millennium Park. Despite the weather it was a great few hours in a the windy city. The rest of the day we spent with family celebrating Thanksgiving. An excellent holiday.

Wednesday afternoon we headed home for the holiday weekend. When we left it was almost 60, five and a half hours later it was in the low 40’s and raining. Visiting with family was good as we split time between mine and Kay’s. It rained through Friday and then started to snow. The snow continued off and on through Sunday morning, totaled about 4 inches.

I worked on a few machines while I was there as Kay’s dad got a new laptop and her sister in law need to move some things around.

Some general thoughts about working on machines this past weekend.

Thursday morning, thanksgiving day, we hopped a plane to Denver for a vist with some friends. Landed at about 8:30 and it was off to Keystone for a couple nights. The highlight there was going to be tubing at Breckenridge, of course going there and not skiing kind of sucks but no one else was up for it. The tubing was a blast though so even if your there to ski I’d recommend taking some runs down the “tub track”. You can see some pics in the new Flickr Feed on the side bar.

Saturday on the way back to Denver we stopped in Idaho Springs at the TommyKnocker micro brewery. It’s a great place to stop in between Denver and Dillon. That night we took in a Avalanche game at the Pepsi center. Sunday the girls shopped and it was football for the guys. All in all a nice few days away. Today it was back on the plane and in Nashville before the rush hour. The boys survived the kennel and it’s good to be home.

Back to the grind in the morning, it’s going to be a busy week.

Not sure if it’s a sign of getting older or just that it’s really another day when it all comes down to it. Heading out to catch an early movie the wife and I drove by the liquor store and it was standing room only. By the time we made it to the fireworks tents they were the same. Either we are just no fun at all or people are desparate for entertainment. After the movie and dinner they were no different jam packed with customers.

Of course up till about 1:00am everyone in the neighborhood was using the fireworks and sitting outside with the dogs, well lets just say it was not an ordinary night. I find it comical at times where roscoe, our six year old black lab, freeks out at the fireworks but does not care about other dogs in the neighborhood. Where cooper, our one and half year old golden and german shepard mix, is just the opposite. Guess that’s what makes them unique or at least it seems that way.

So no late night parties for us but it was still a happy new year.